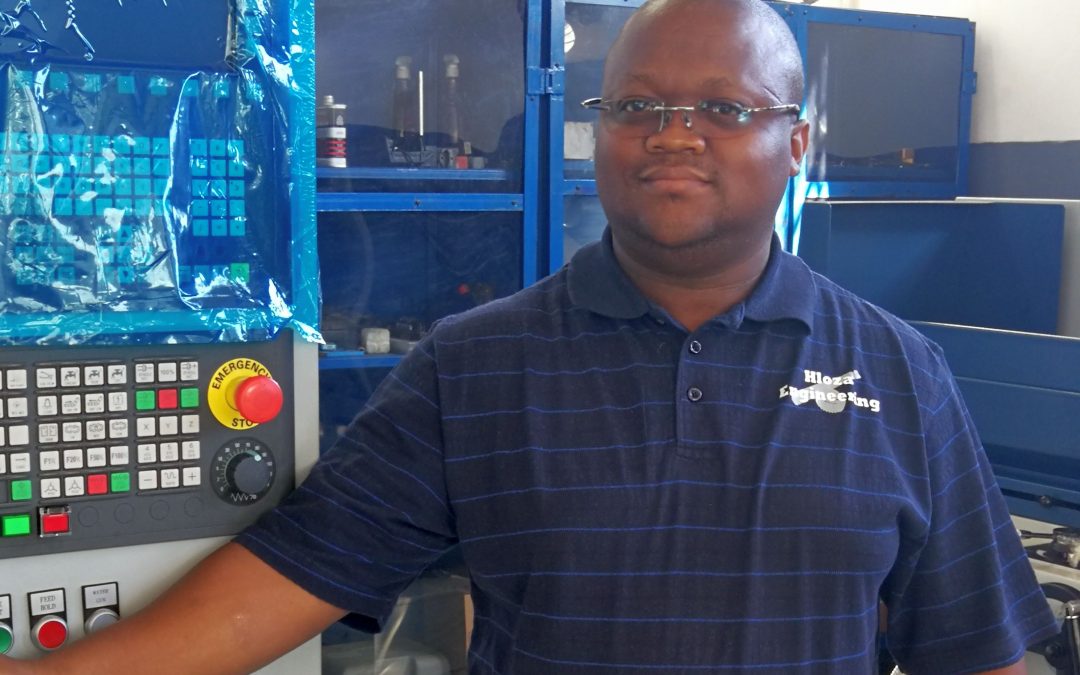 Jendamark-mentored supplier Phumzile Heshu shares how he overcame the odds and what drove him to become a successful businessman with his own engineering company.

As a young boy growing up in an impoverished area of Port Elizabeth, South Africa, Phumzile Heshu liked to play behind Continental Tyre. He would gaze at the massive tyre plant and vow that one day he would work there.

Although he was already driven by ambition, little did Heshu realise that his desire to succeed would one day see him reaching the point where his 10-year plan would be to list his recently established engineering company on the Johannesburg Stock Exchange.

Earlier this year, his business efforts saw him being awarded a R2.9-million grant from the Eastern Cape Department of Economic Development, Environmental Affairs and Tourism, which he used to buy a high-tech machine to increase manufacturing capacity.

“I am living the dream – but I would not have got where I am without the invaluable assistance I received over the past few years from Jendamark,” he says.

WILLING TO WORK
Heshu’s remarkable success story began at school where he may not have been the best scholar but worked tirelessly to achieve the desired results.

He went on to gain a diploma in mechanical engineering and then landed his dream job at Continental Tyre, where he worked as a mechanical technician for almost 17 years.

“But it was time to move on. I wanted to open my own business, so I bought a turning machine and approached a friend, Leroy Green of Modimad Engineering, asking if I could rent some of his machines. After he agreed, all I needed was clients.”

Almost instantly, brands such as Kanu Commercial Body Construction, Goodyear, Continental and Transnet came on board, offering Heshu the chance he desperately craved, but it was not enough, so he plucked up the courage to approach Jendamark.

HELPING HAND
“The Jendamark team were very receptive from the outset and agreed to give me work. While they were very happy with the products I was delivering, I was floundering and running up debts,” he says.

Struggling under the financial constraints, Heshu turned to Jendamark management for assistance. Seeing an opportunity to assist with sustainable small business development, they instantly offered to mentor him in growing his business and help him manage his finances.

A few months later, in 2017, he was doing so well that the decision was made to move away from Modimad and set up his own company – Hloza Engineering.

Once again, Jendamark came to the aid of the fledgling business, helping him to relocate to premises in Schadie Street in Schauderville.
Heshu has since moved across the road, where a modern workshop runs smoothly under his guidance.

EXPANSION PLANS
While he already manufactures steel and aluminium parts for Jendamark as well as Hloza’s other customers, Heshu is still a dreamer at heart and plans to expand even further.

“That was the whole point of the Bhisho grant, which was not easily secured. There were a lot of background checks, testimonials had to be produced and lots of questions asked,” says Heshu.

“When I learnt that I had secured it, I was over the moon. The funds allowed me to buy a state-of-the-art CNC [Computer Numerical Control] machine with a diverse range of functions.

“This, in turn, will allow me to increase capacity and, hopefully, take on more staff.”

When this happens, Heshu will remain true to his roots and offer other previously disadvantaged people the same opportunities Jendamark afforded him.

“When I couldn’t sleep at night for worrying, Jendamark cleared the path for me. They taught me to prioritise, how to control my finances and how to stay focused.

PAYING IT FORWARD
“While I am eternally grateful to them for helping me to realise my dream, I will know when it is time to leave the nest. That’s when it will be my turn to help others in the same way that Jendamark helped me.”

The Heshu family are all involved in building the business’s long-term success.

“My wife, Zoleka, is a director, taking the admin off my shoulders and all four of my children, from my eldest daughter to my youngest child, the only boy, are already a big part of the business,” Heshu says.

“They are the future of my company – one which, if all goes to plan, will be listed on the JSE within the next 10 years. One day I hope to operate on the same level as Jendamark, who gave me the courage to  fulfil my dream. Now my dream is to pay it forward.”